Finite-sample efficiency of the Rousseeuw-Croux estimators

The Rousseeuw-Croux \(S_n\) and \(Q_n\) estimators are robust and efficient measures of scale. Their breakdown points are equal to \(0.5\) which is also the breakdown point of the median absolute deviation (MAD). However, their statistical efficiency values are much better than the efficiency of MAD. To be specific, the MAD asymptotic relative Gaussian efficiency against the standard deviation is about \(37\%\), whereas the corresponding values for \(S_n\) and \(Q_n\) are \(58\%\) and \(82\%\) respectively. Although these numbers are quite impressive, they are only asymptotic values. In practice, we work with finite samples. And the finite-sample efficiency could be much lower than the asymptotic one. In this post, we perform a simulation study in order to obtain the actual finite-sample efficiency values for these two estimators.

Preprint announcement: 'Finite-sample bias-correction factors for the median absolute deviation based on the Harrell-Davis quantile estimator and its trimmed modification'

I have just published a preprint of a paper ‘Finite-sample bias-correction factors for the median absolute deviation based on the Harrell-Davis quantile estimator and its trimmed modification’. It’s based on a series of my research notes that I have been writing since February 2021.

The median absolute deviation is a widely used robust measure of statistical dispersion. Using a scale constant, we can use it as an asymptotically consistent estimator for the standard deviation under normality. For finite samples, the scale constant should be corrected in order to obtain an unbiased estimator. The bias-correction factor depends on the sample size and the median estimator. When we use the traditional sample median, the factor values are well known, but this approach does not provide optimal statistical efficiency. In this paper, we present the bias-correction factors for the median absolute deviation based on the Harrell-Davis quantile estimator and its trimmed modification which allow us to achieve better statistical efficiency of the standard deviation estimations. The obtained estimators are especially useful for samples with a small number of elements.

In this post, we consider the problem of change point detection in time series based on software performance measurements obtained from a continuous integration (CI) server. Examples of data sources are CI builds, unit tests, benchmarks, performance tests, and so on. We would like to automatically find performance degradations in such time series. Unfortunately, most of the available algorithms do not provide decent solutions for this problem. In this post, I discuss some challenges that arise when we are looking for change points in CI performance data.

We consider the following dynamical system:

where \(L\) is a piecewise linear function:

In this case study, we build a Shiny application that draws 3D phase portraits of this system for various sets of input parameters. 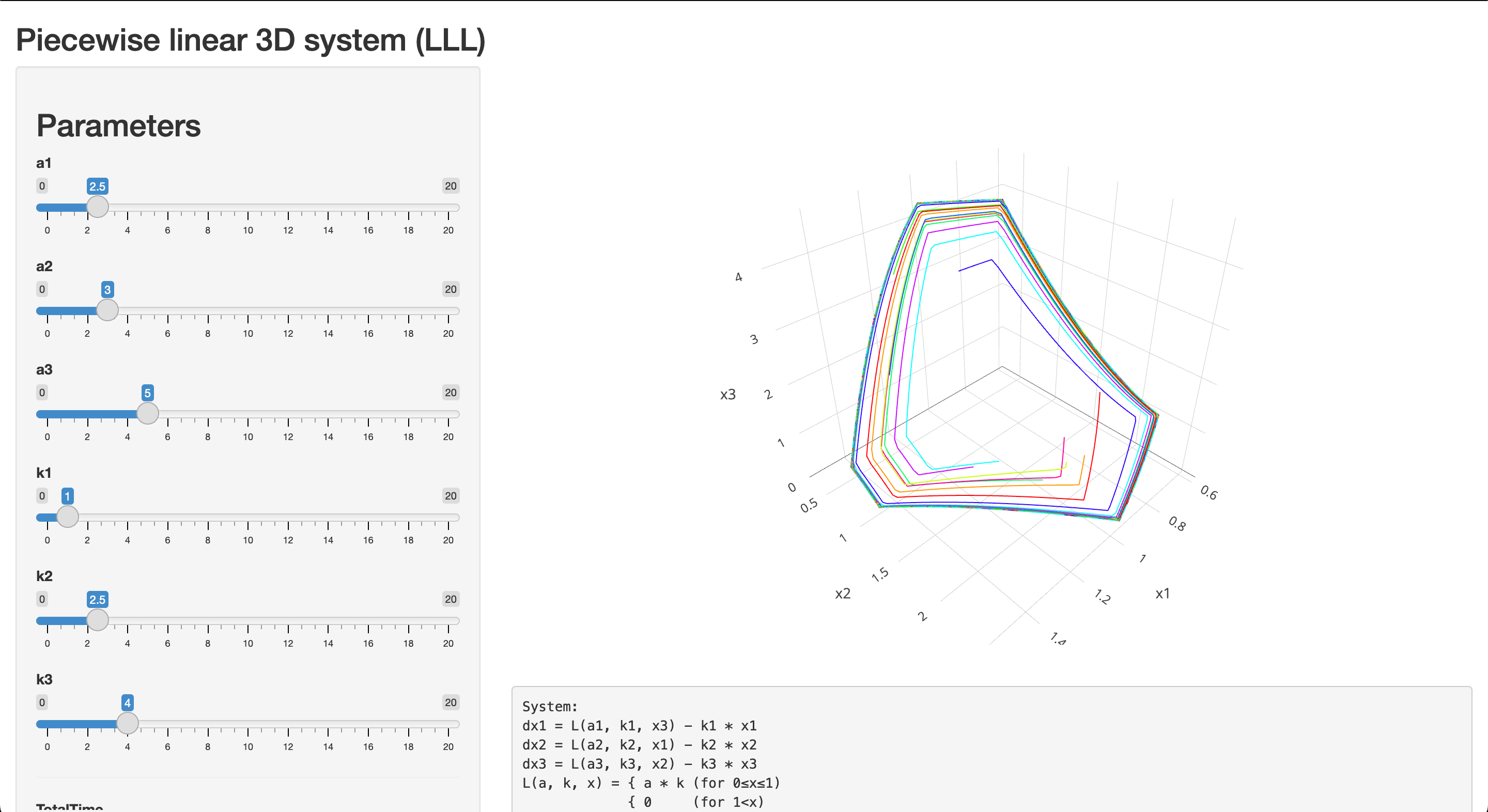 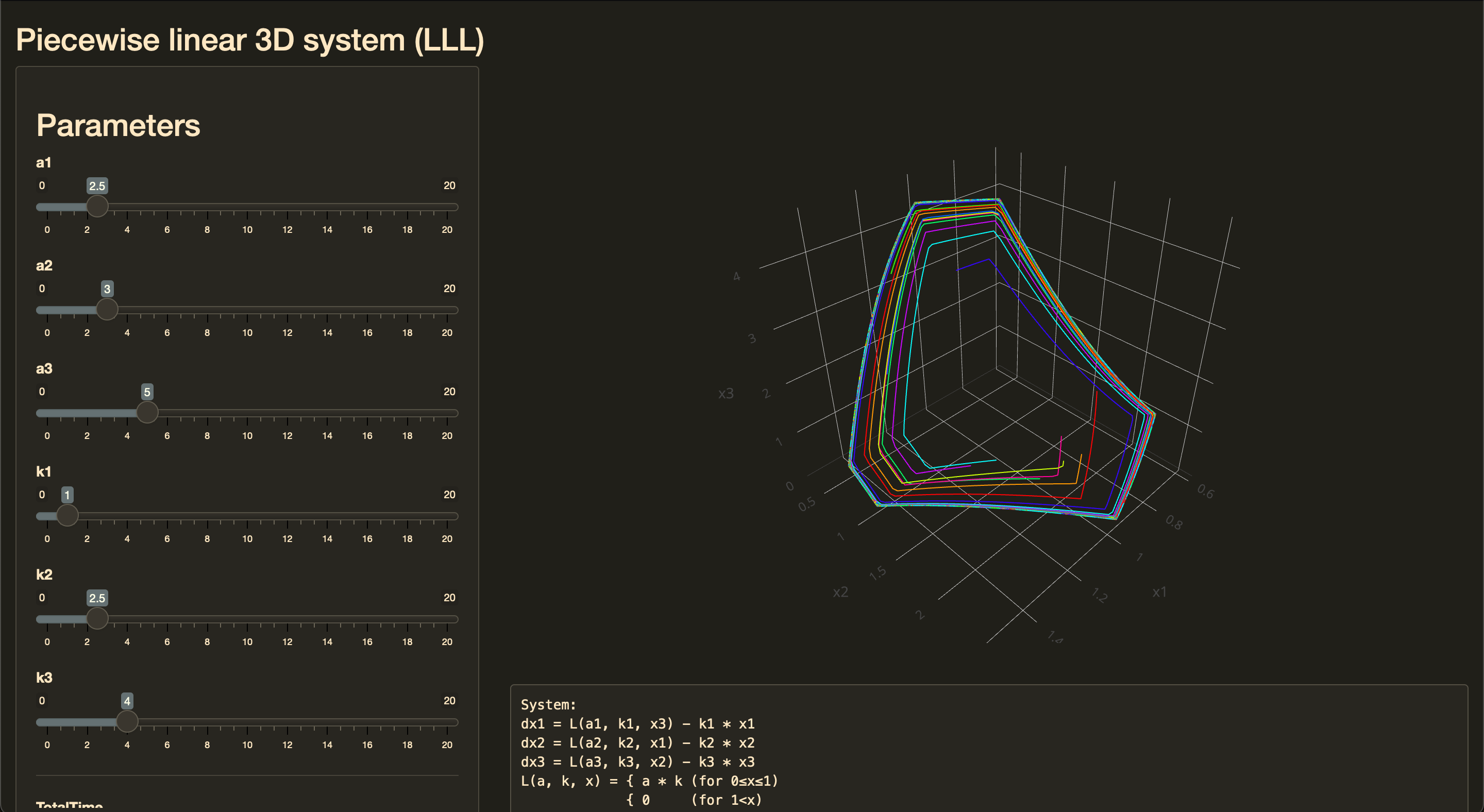 Recently, I have been working on searching for a robust statistical dispersion estimator that doesn’t become zero on samples with a huge number of tied values. I have already created a few of such estimators like the middle non-zero quantile absolute deviation (part 1, part 2) and the untied quantile absolute deviation. Having several options to compare, we need a proper metric that allows us to perform such a comparison. Similar to the breakdown point (that is used to describe estimator robustness), we could introduce the degenerate point that describes the resistance of a dispersion estimator to the tied values. In this post, I will briefly describe this concept.

In the previous posts, I tried to adapt the concept of the quantile absolute deviation to samples with tied values so that this measure of dispersion never becomes zero for nondegenerate ranges. My previous attempt was the middle non-zero quantile absolute deviation (modification 1, modification 2). However, I’m not completely satisfied with the behavior of this metric. In this post, I want to consider another way to work around the problem with tied values.

In one of the previous posts, I described the idea of the middle non-zero quantile absolute deviation. It’s defined as follows:

where \(\mathbf{1}\) is the indicator function

and \(\operatorname{QAD}\) is the quantile absolute deviation

The \(\operatorname{MNZQAD}\) approach tries to work around a problem with tied values. While it works well in the generic case, there are some corner cases where the suggested metric behaves poorly. In this post, we discuss this problem and how to solve it.

Let’s consider a discrete distribution \(X\) defined by its probability mass function \(p_X(x)\). We randomly take elements from \(X\) until we observe the given element \(x_0\). What’s the expected number of takes in this process?

This classic statistical problem could be solved in various ways. I would like to share one of my favorite approaches that involves the derivative of the series \(\sum_{n=0}^\infty x^n\).