August 31, 2021
Mathematics Statistics Research Quantile Estimators Quantile estimators based on k order statistics Research: Building trimmed Harrell-Davis quantile estimator
Update: this blog post is a part of research that aimed to build a statistically efficient and robust quantile estimator. A paper with final results is available in Communications in Statistics - Simulation and Computation (DOI: 10.1080/03610918.2022.2050396). A preprint is available on arXiv: arXiv:2111.11776 [stat.ME]. Some information in this blog post can be obsolete: please, use the official paper as the primary reference.

During the last several months, I have been experimenting with different variations of the trimmed Harrell-Davis quantile estimator. My original idea of using the highest density interval based on the fixed area percentage (e.g., HDI 95% or HDI 99%) led to a set of problems with overtrimming. I tried to solve them with manually customized trimming strategy, but this approach turned out to be too inconvenient; it was too hard to come up with optimal thresholds. One of the main problems was about the suboptimal number of elements that we actually aggregate to obtain the quantile estimation. So, I decided to try an approach that involves exactly k order statistics. The idea was so promising, but numerical simulations haven’t shown the appropriate efficiency level.

This bothered me the whole week. It sounded so reasonable to trim the Harrell-Davis quantile estimator using exactly k order statistics. Why didn’t this work as expected? Finally, I have found a fatal flaw in my previous approach: while it was a good idea to fix the size of the trimming window, I mistakenly chose its location following the equation from the Hyndman-Fan Type 7 quantile estimator!

In this post, we fix this problem and try another modification of the trimmed Harrell-Davis quantile estimator based on k order statistics and highest density intervals at the same time.

All posts from this series:

First of all, let’s see in detail what’s wrong with the approach from the previous blog post. To illustrate the problem, let’s consider the following setting:

Due to these illogical weight assignments, the statistical efficiency of THD-HF7 is poor (which was shown in the previous post).

It’s time to fix the problem and try another approach.

As stated earlier, we keep the idea of using k order statistics. It means that the size of the trimming window is fixed:

However, we are going to change the location of this window so as to get the highest density interval (HDI) of the Beta distribution.

We are going to take the same simulation setup that was declared in this post. Briefly speaking, we evaluate the classic MSE-based relative statistical efficiency of different quantile estimators on samples from different light-tailed and heavy-tailed distributions using the classic Hyndman-Fan Type 7 quantile estimator as the baseline.

Here are some of the statistical efficiency plots: 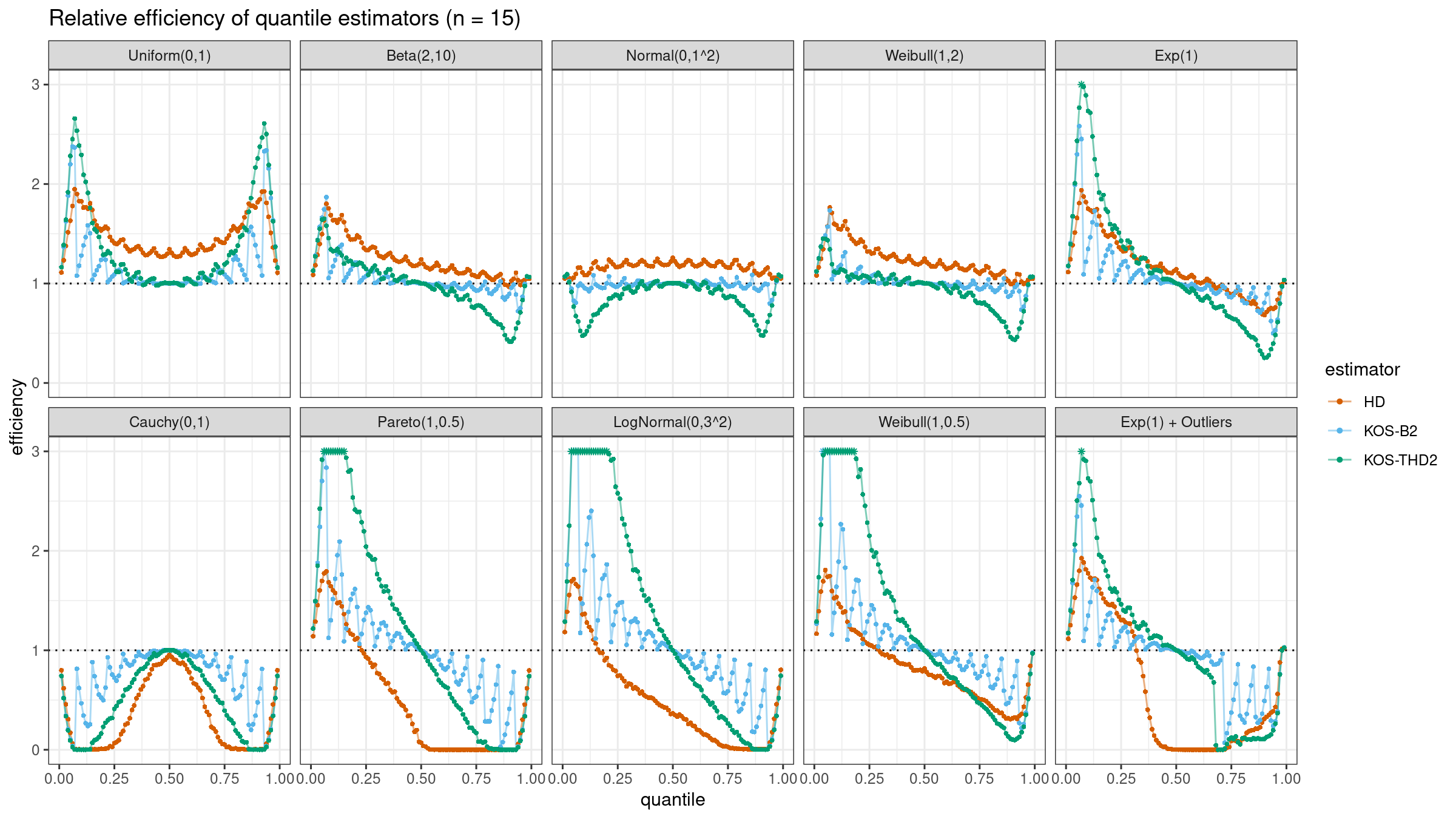 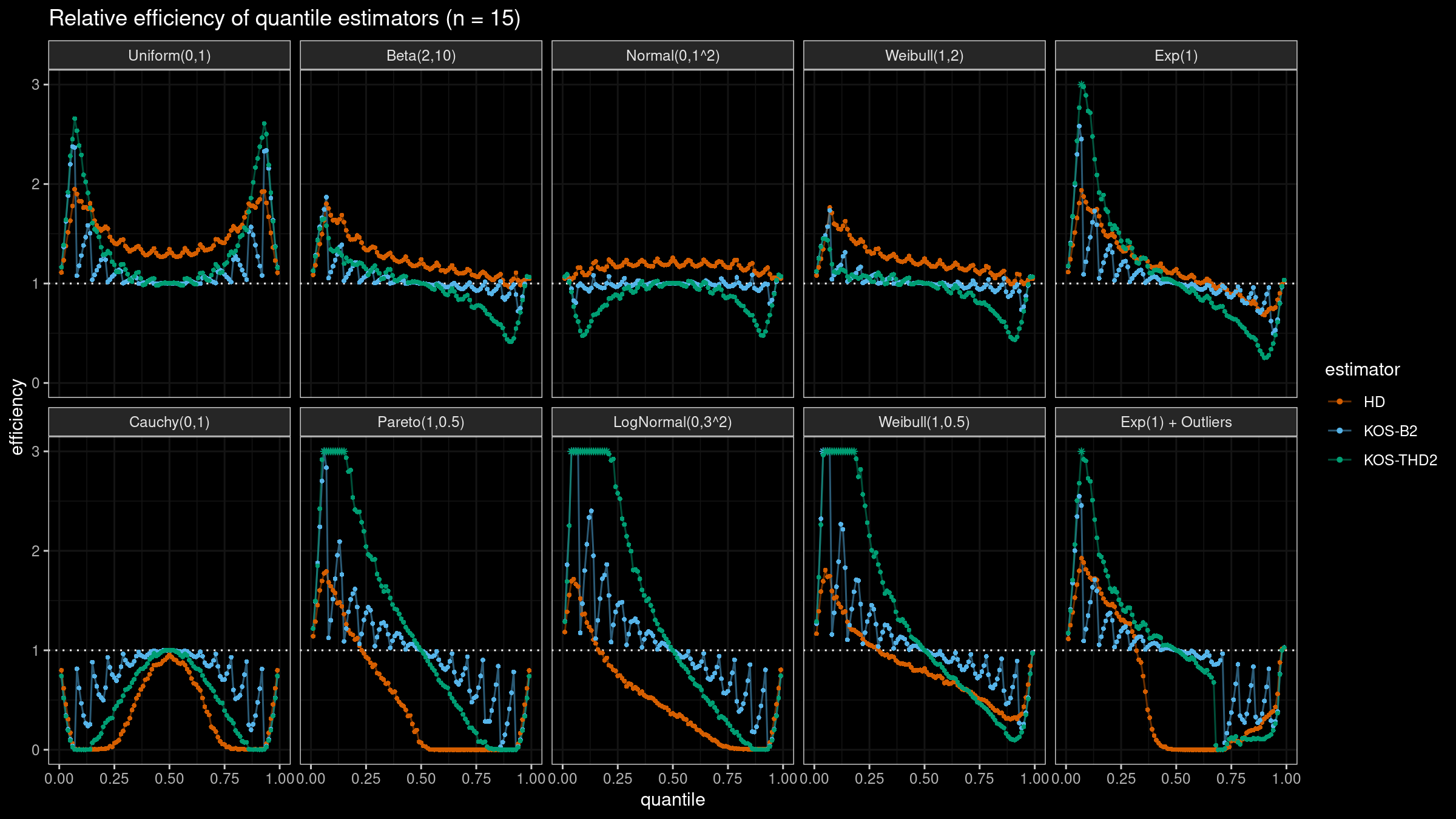 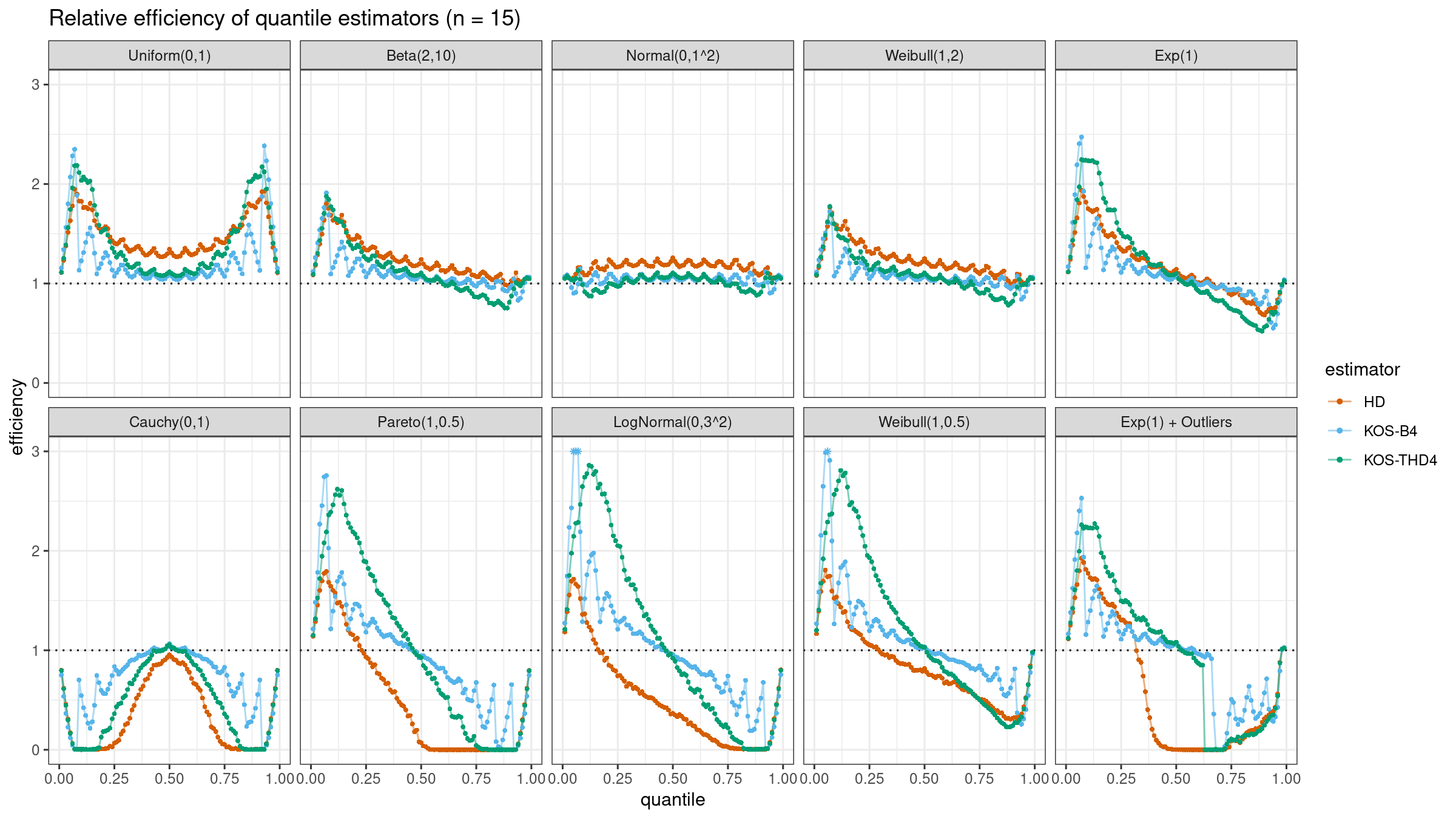 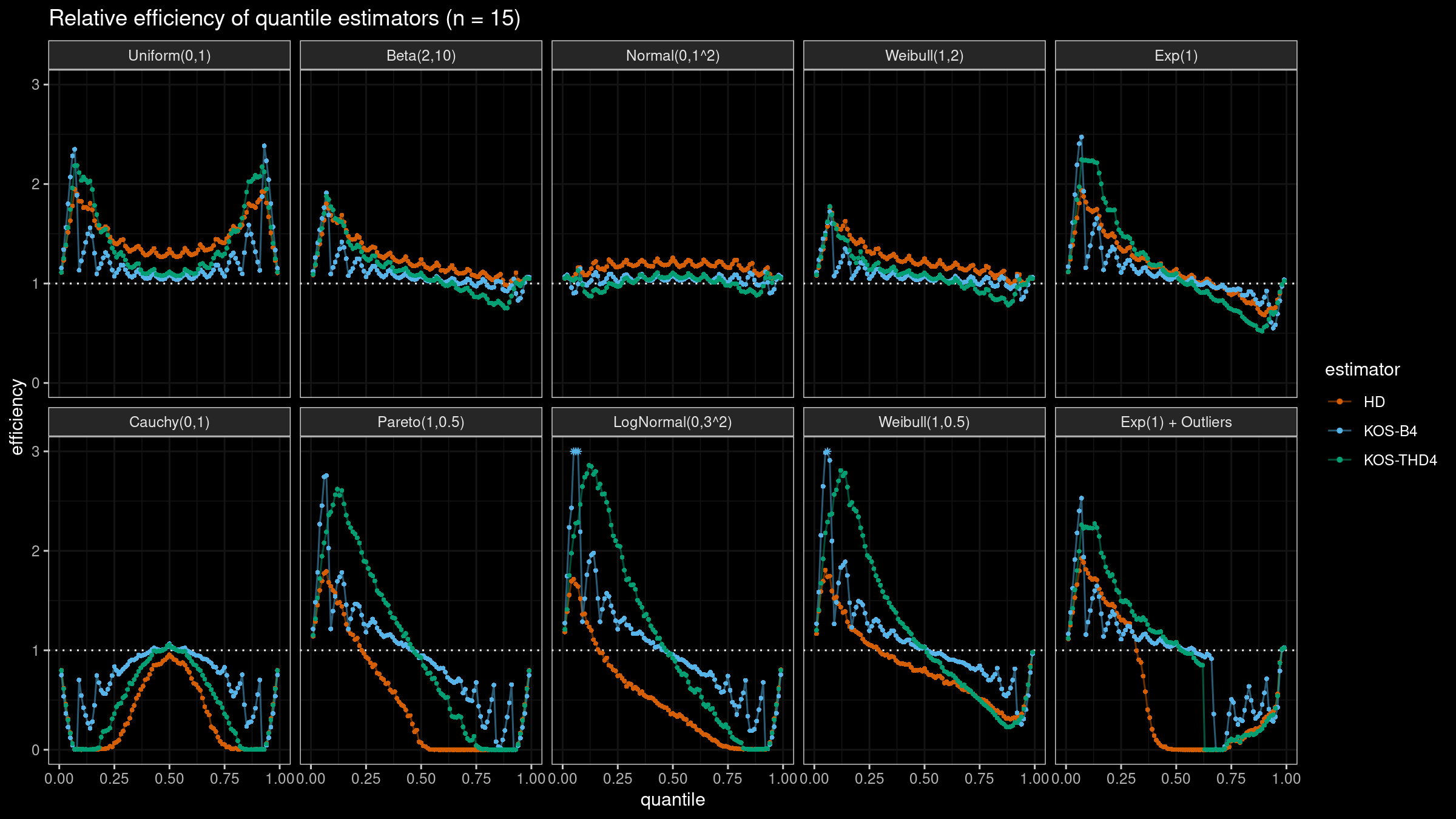 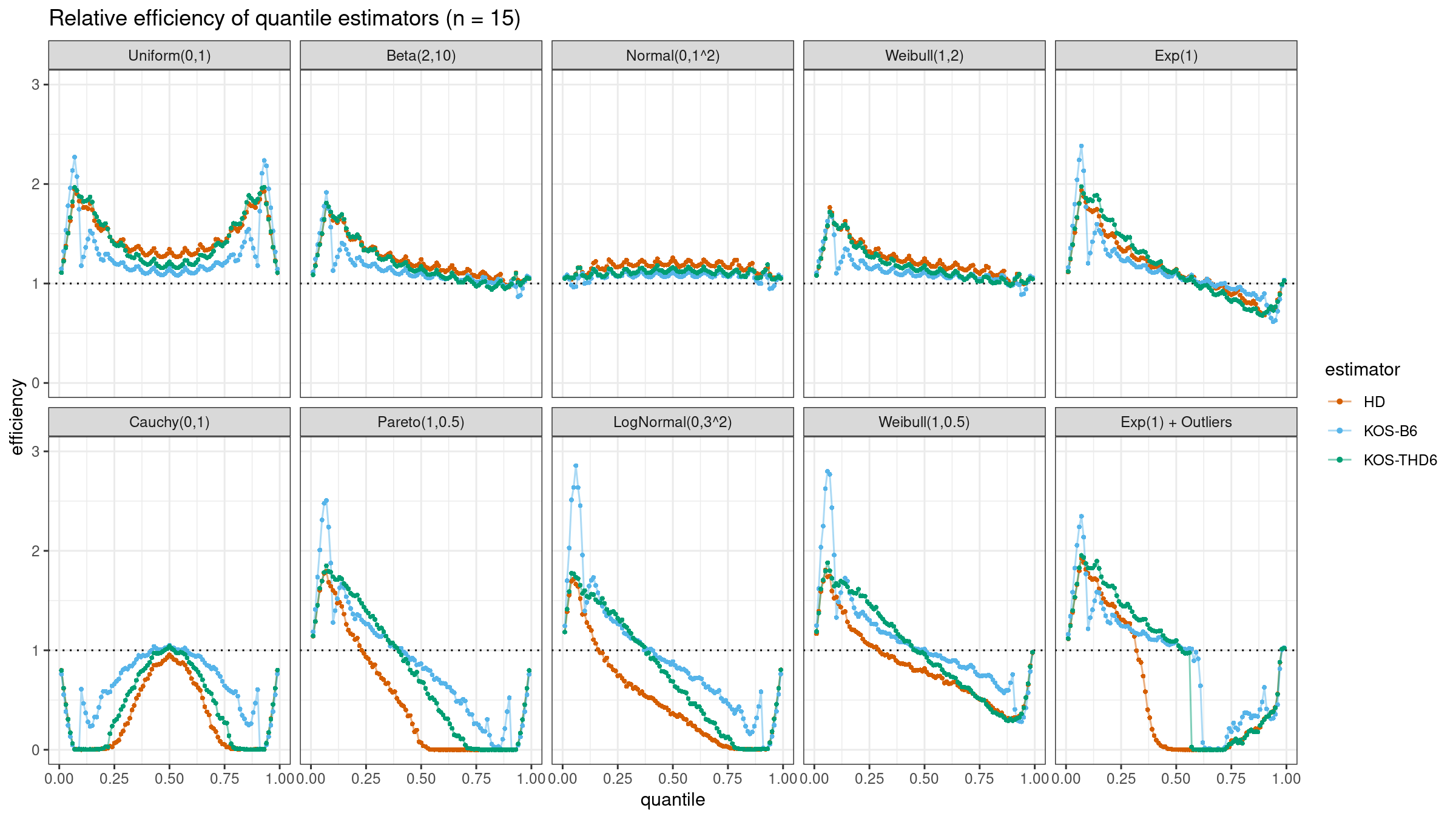 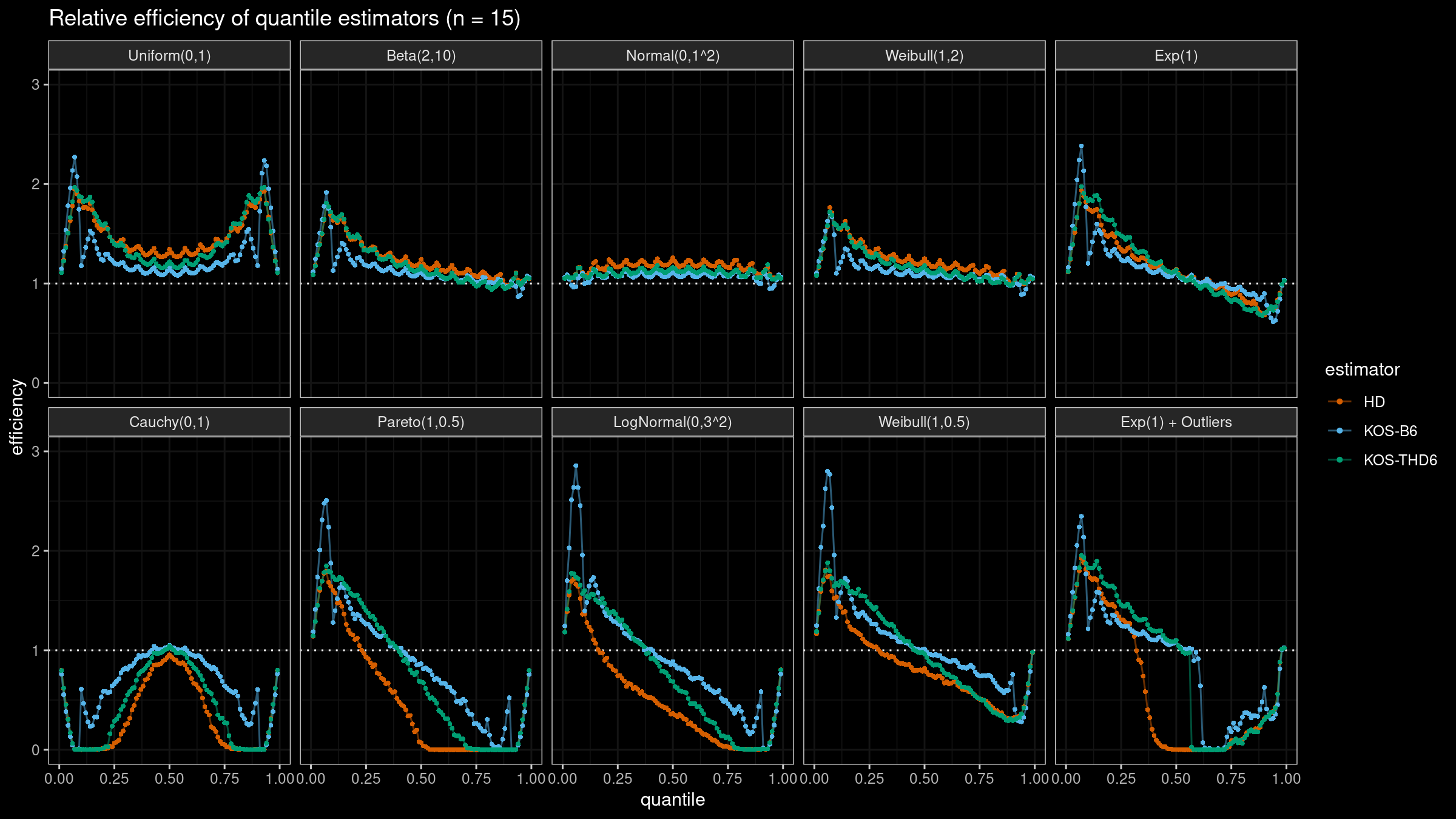 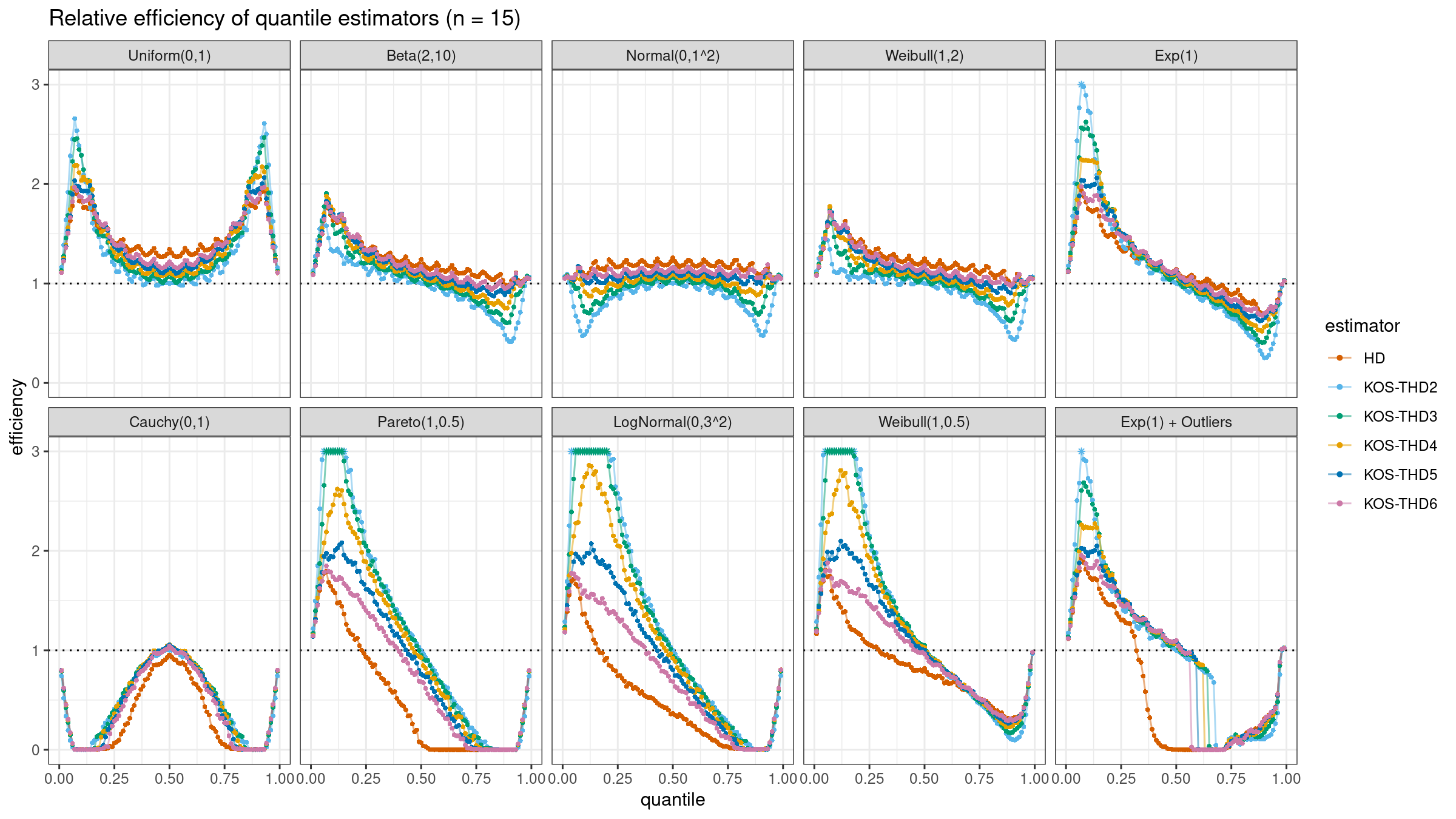 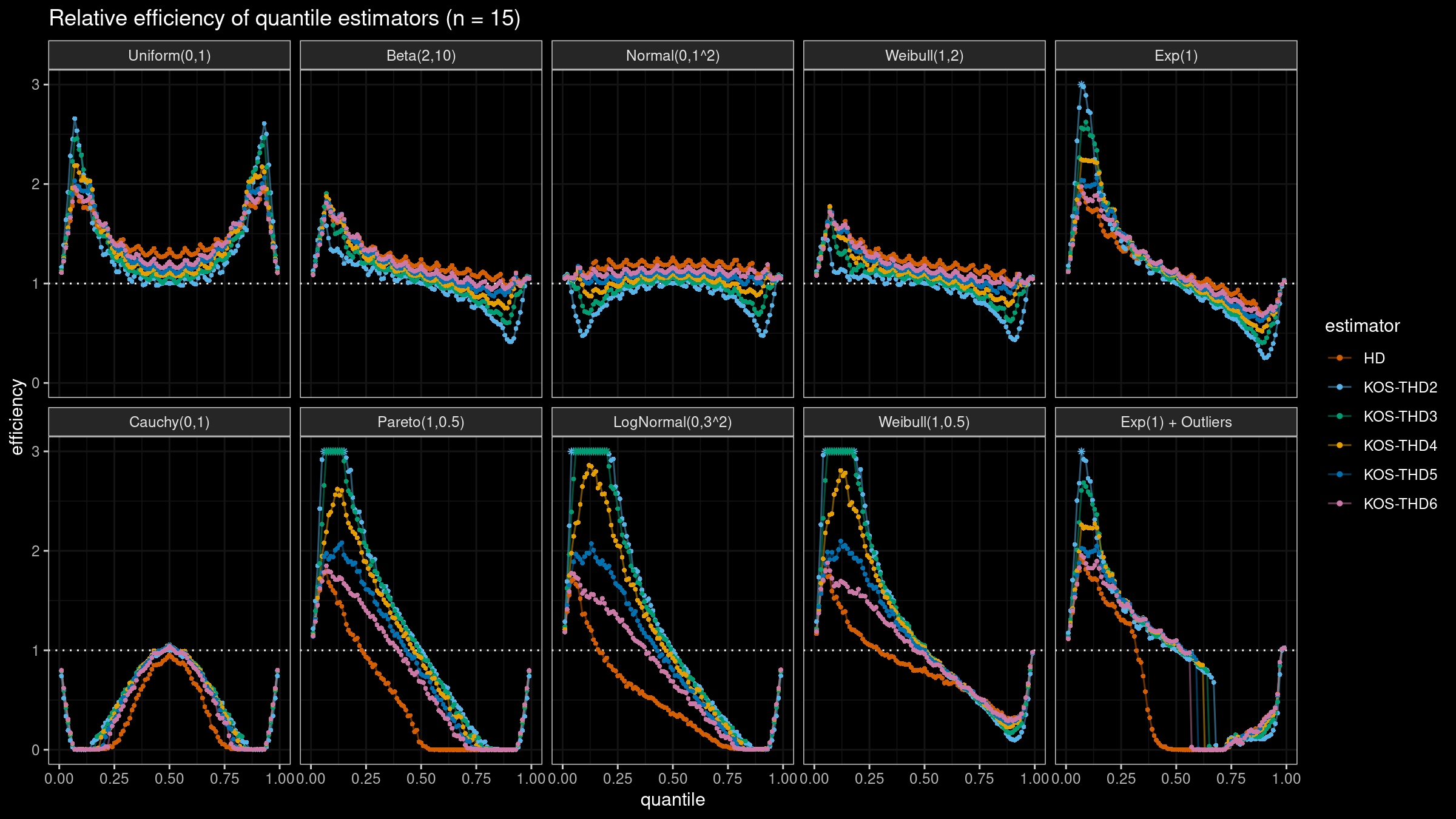 It sounds reasonable to use the trimmed modifications of the Harrell-Davis quantile estimator with the trimming strategy based on k order statistics. Unlike the originally proposed approach with the trimming strategy based on the highest density interval of the given area, the updated version of THD doesn’t become degenerated in the corner cases (the problem of over-trimming). Also, it provides more direct control of the estimator breakdown point, which is also a nice feature.

In the next post, I will try to come up with further improvements of the suggested estimator.