Performance is tricky. Especially, if you are working with very fast operations. In today benchmarking exercise, we will try to measure performance of two simple methods which calculate minimum of two numbers. Sounds easy? Ok, let’s do it, here are our guinea pigs for today:

And here are some results:

What’s going on here? Let’s discuss it in detail.

The first implementation looks obvious, but it has one significant problem: it could suffer from branch mispredictions because of a condition in the expression. Fortunately, it is possible to rewrite it without a branch with the help of bit hacks:

Here we calculate (x-y), the sign of this expression depends on which number is less. Then, (x-y) >> 31 gives a bit mask which contains only zeros or ones. Next, we calculate an inverted mask: ~(x - y) >> 31. Now we and our operands and the corresponded bit masks (the minimum number get the 11...11 mask). That’s all: the or operator returns the correct result. 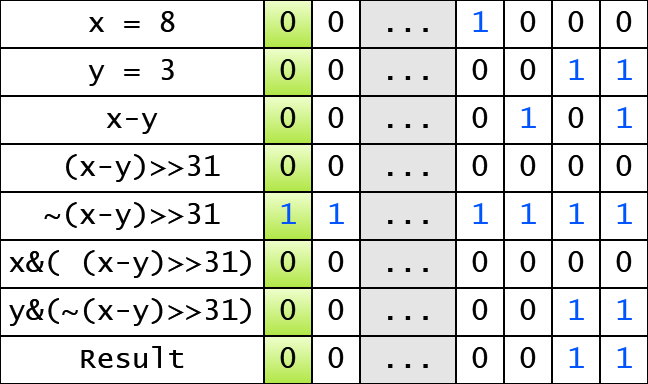 As you can see, here is no a branch here: we compute the minimum using only bit operations.

It’s wrong to discuss the performance of some operations in general; we always should think about a space of the performance results (I call it performance space). Simplifying, you have to consider the following:

Here the source code of my benchmarks (based on BenchmarkDotNet v0.10.1):

Results in a nice form:

First, let’s look at the right part of the table with const input. Here Ternary is always faster than BitHacks because it takes a small amount of instruction and the branch predictor works perfectly. For the random input on Full .NET Framework the BitHacks is faster for all JIT compilers. And there is an explanation for this: Ternary has a big performance penalty because it’s hard to predict the correct branch. Performance of BitHacks is the same for both input patterns and it also makes sense: this method doesn’t depend on branch predictor. However, we could also make a few interesting observation about Mono:

How is it possible? Let’s look at the asm. Here is the asm code for RyuJIT-x64:

Here Mono uses the cmovl instruction (0F4C). So, it will not suffer from branch mispredictions because there is no branch on the asm level (despite we have a condition in the source C# code).

Thus, we can’t make a conclusion about MinTernary and MinBitHacks performance in general. It’s impossible to say which implementation is better for your problem without additional measurements because it depends on different conditions (like input data pattern and target runtime).

Is it a complete performance investigation? Of course, it’s not. We miss something in each component of our performance space:

However, we get a good result: we have shown a part of performance space for target operations, and we have found relevant conditions which could affect the speed of our program. Note that it was just a benchmarking exercise, I wanted to show that there are a lot of troubles with benchmarking even in this simple case. Be careful with your performance measurements.