October 19, 2021
Mathematics Statistics Research Research: Building trimmed Harrell-Davis quantile estimator
Update: this blog post is a part of research that aimed to build a statistically efficient and robust quantile estimator. A paper with final results is available in Communications in Statistics - Simulation and Computation (DOI: 10.1080/03610918.2022.2050396). A preprint is available on arXiv: arXiv:2111.11776 [stat.ME]. Some information in this blog post can be obsolete: please, use the official paper as the primary reference.

The traditional way to do this is to use a single order statistic or a linear combination of two subsequent order statistics. This approach could be implemented in various ways. A classification of the most popular implementations could be found in [Hyndman1996]. In this paper, Rob J. Hyndman and Yanan Fan describe nine types of traditional quantile estimators which are used in statistical computer packages. The most popular approach in this taxonomy is Type 7 which is used by default in R, Julia, NumPy, and Excel:

Traditional quantile estimators have simple implementations and a good robustness level. However, their statistical efficiency is not always good enough: the obtained estimations could noticeably differ from the true distribution quantile values. The gap between the estimated and true values could be decreased by increasing the number of used order statistics. In [Harrell1982], Frank E. Harrell and C. E. Davis suggest estimating quantiles using a weighted sum of all order statistics: 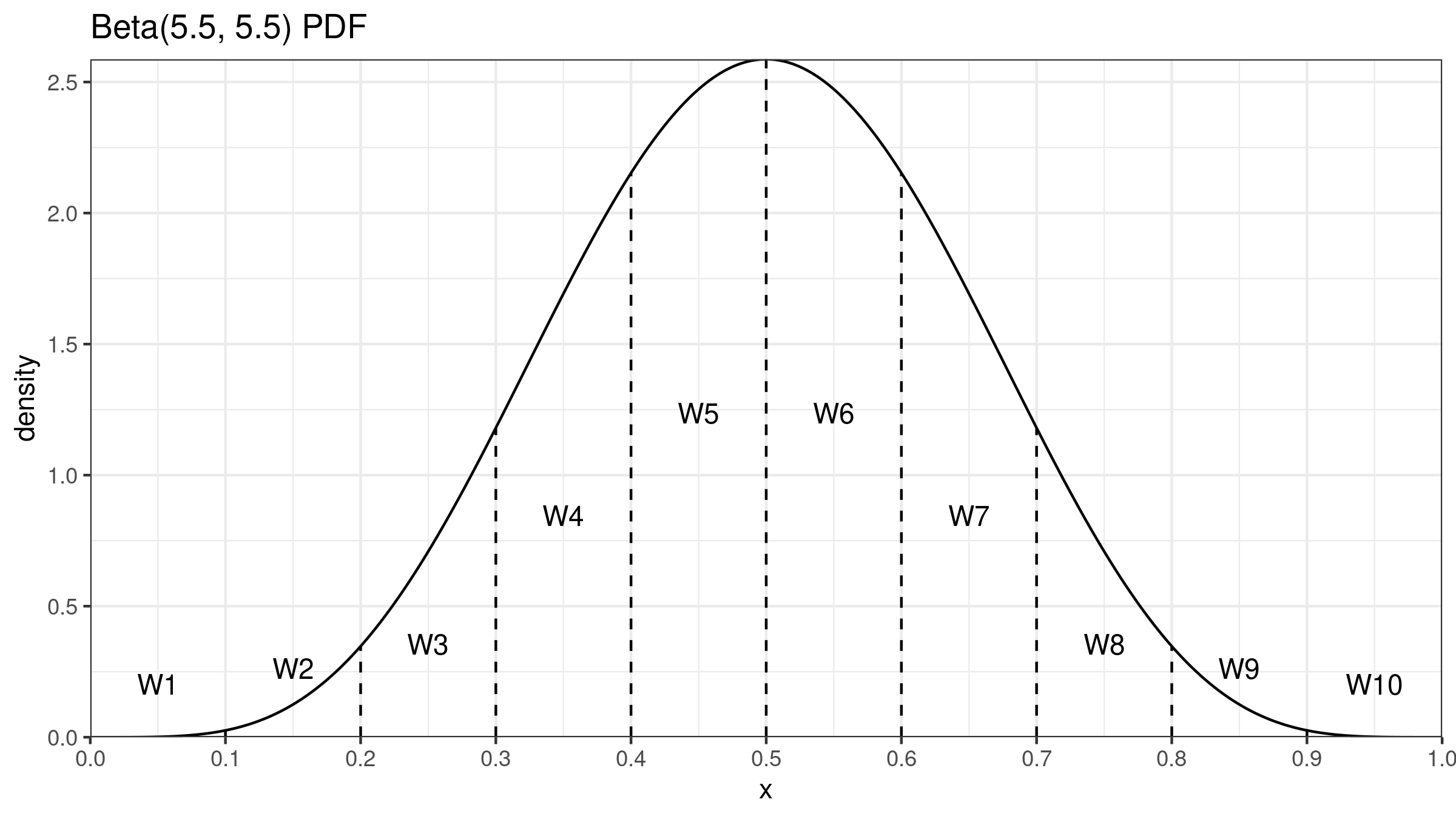 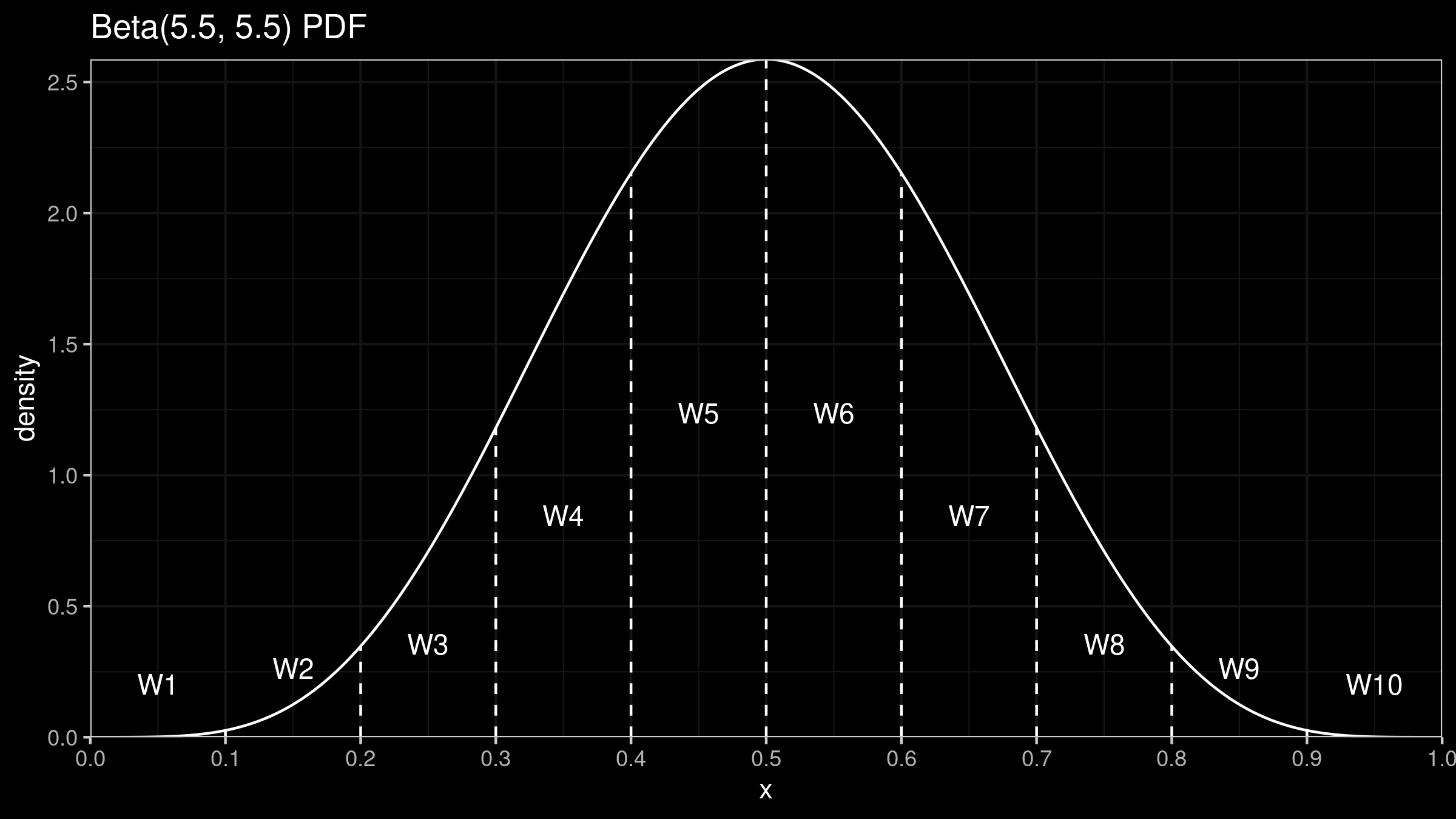 The Harrell-Davis quantile estimator shows decent statistical efficiency in the case of light-tailed distributions: its estimations are much more precise than estimations of the traditional quantile estimators. However, the improved efficiency has a price: \(Q_{\operatorname{HD}}\) is not robust. Since the estimation is a weighted sum of all order statistics with positive weights, a single corrupted element may spoil all the quantile estimations, including the median. It may become a severe drawback in the case of heavy-tailed distributions in which it’s a typical situation when we have a few extremely large outliers. In such cases, we use the median instead of the mean as a measure of central tendency because of its robustness. Indeed, if we estimate the median using the traditional quantile estimators like \(Q_{\operatorname{HF7}}\), its asymptotical breakdown point is 0.5. Unfortunately, if we switch to \(Q_{\operatorname{HD}}\), the breakdown point becomes zero so that we completely lose the median robustness.

A robust alternative to the mean is the trimmed mean. The idea behind it is simple: we should discard some sample elements at both ends and use only the middle order statistics. With this approach, we can customize the trade-off between robustness and statistical efficiency by controlling the number of the discarded elements. If we apply the same idea to \(Q_{\operatorname{HD}}\), we can build a trimmed modification of the Harrell-Davis quantile estimator. Let’s denote it as \(Q_{\operatorname{THD}}\). 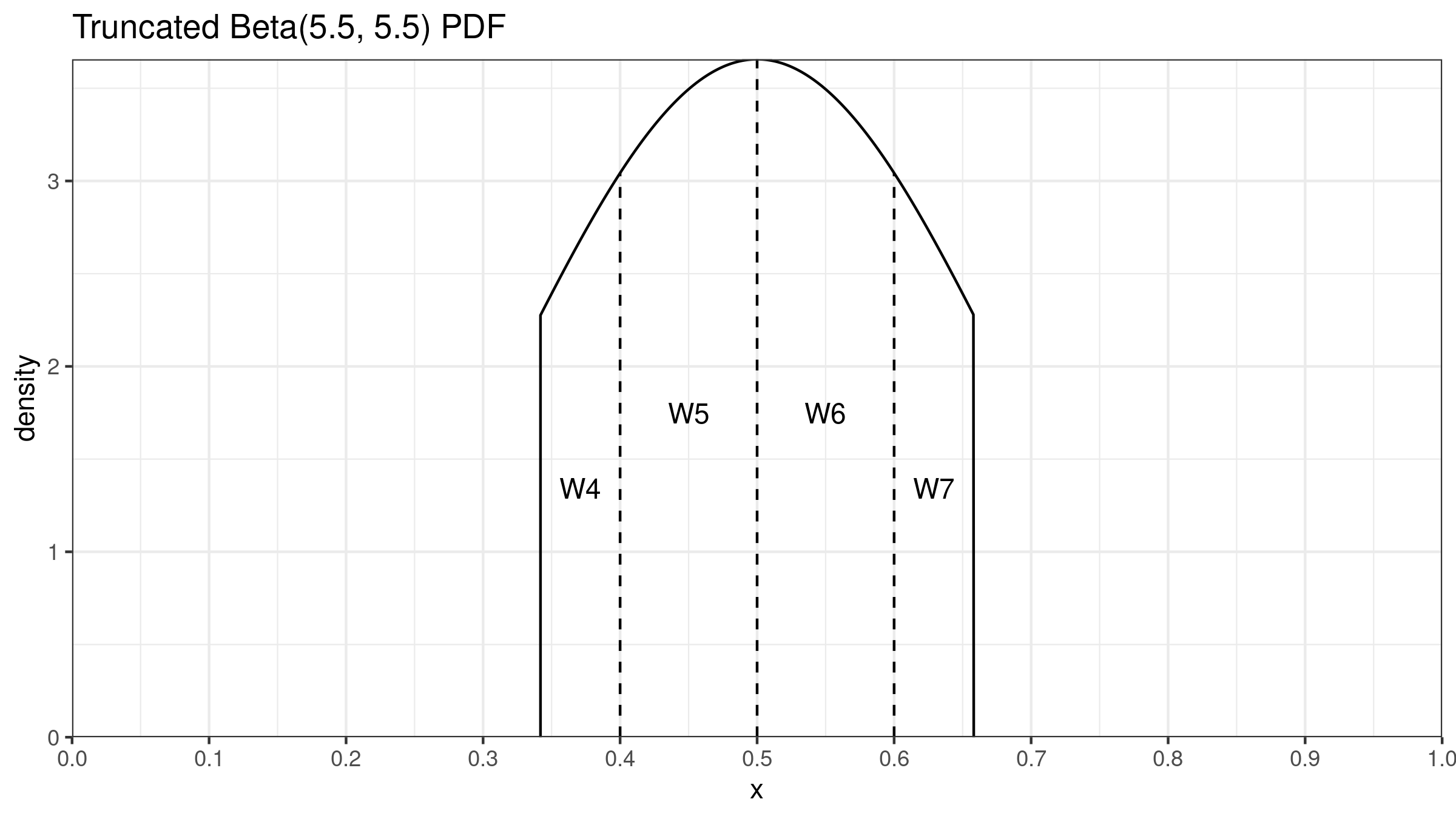 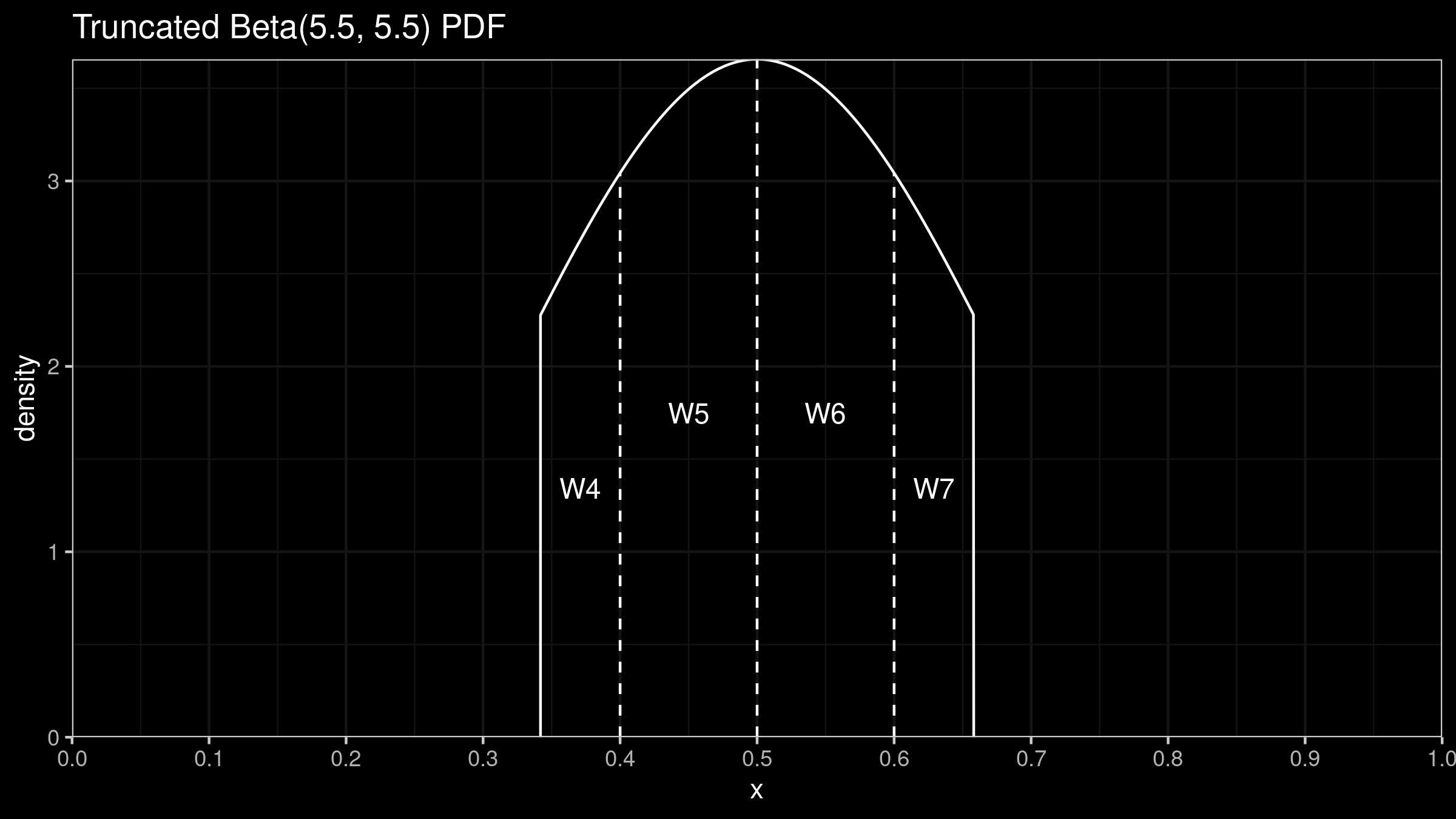 There is only one thing left to do: we should choose an appropriate width \(D\) of the beta distribution highest density interval. In practical application, this value should be chosen based on the given problem: researchers should carefully analyze business requirements, describe desired robustness level via setting the breakdown point, and come up with a \(D\) value that satisfies the initial requirements.

An example Let’s say we have the following sample:

Nine elements were randomly taken from the standard normal distribution \(\mathcal{N}(0, 1)\). The last element \(x_{10}\) is an outlier. The weight coefficient for \(Q_{\operatorname{HD}}\) an \(Q_{\operatorname{THD-SQRT}}\) are presented in the following table:

Here are the corresponding quantile estimations:

Beta distribution highest density interval of the given width

In order to build the truncated beta distribution for \(Q_{\operatorname{THD}}\), we have to find the \(\operatorname{Beta}(\alpha, \beta)\) highest density interval of the required width \(D\). Thus, for the given \(\alpha, \beta, D\), we should provide an interval \([L;R]\):

Let’s briefly discuss how to do this. First of all, we should calculate the mode \(M\) of \(\operatorname{Beta}(\alpha, \beta)\): 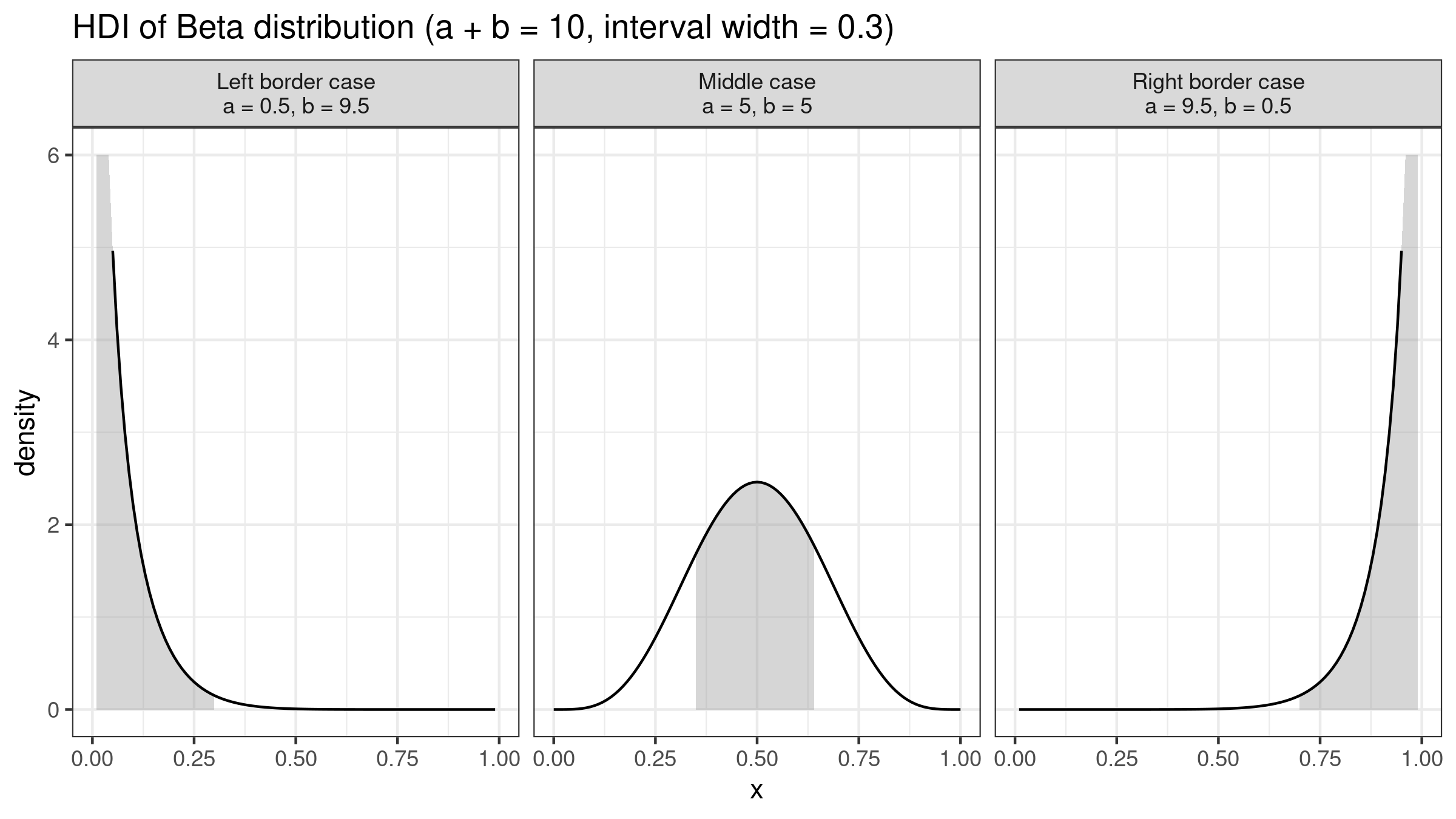 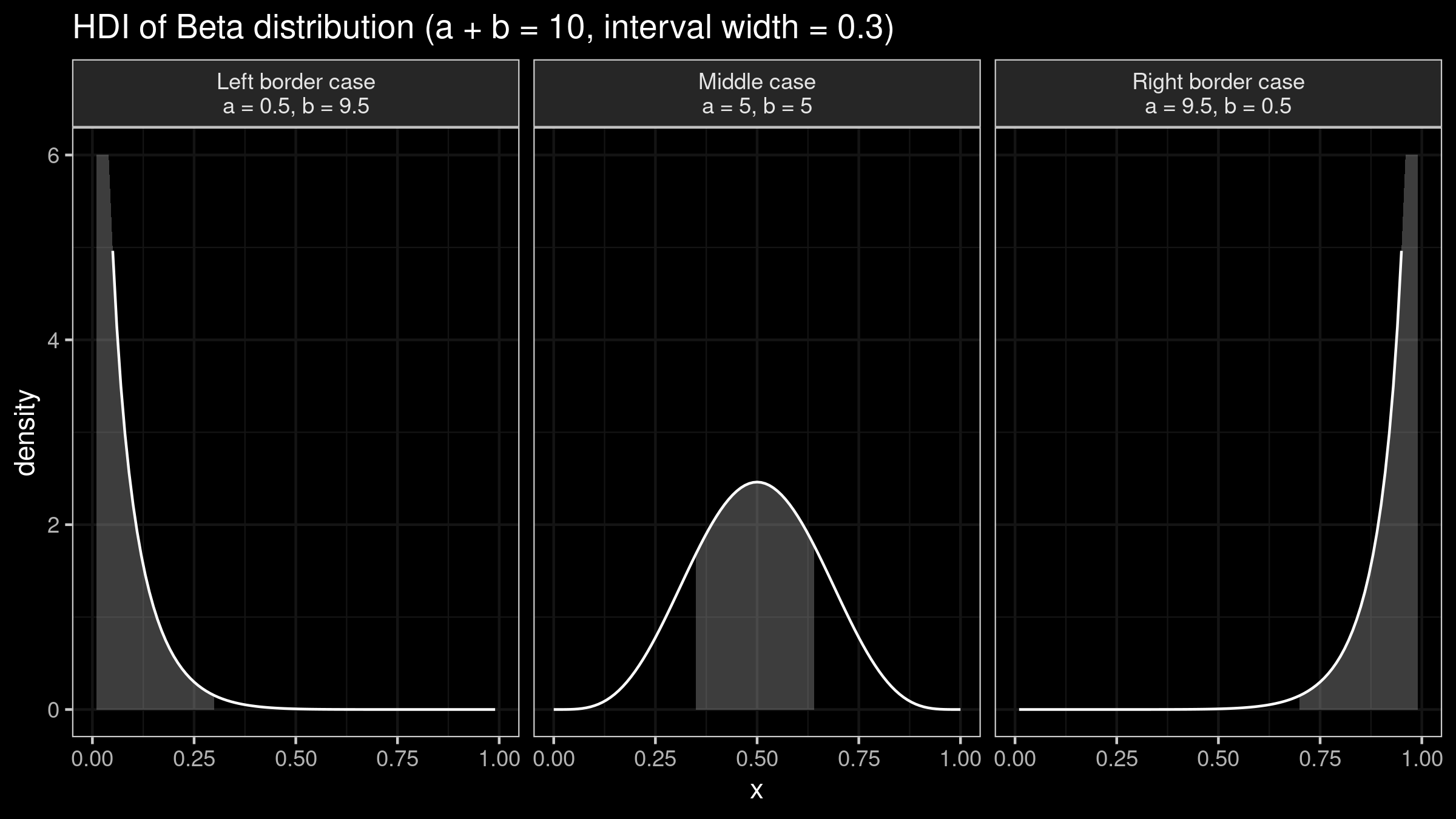 The actual value of \(\operatorname{BetaHDI}(\alpha, \beta, D)\) depends on the specific case from the above list which defines the mode location. Three of these cases are easy to handle:

The density function of the beta distribution is also known:

It’s easy to see that for the highest density interval \([L; R]\), the following condition is true:

The left border \(L\) of this interval could be found as a solution of the following equation:

Let’s perform a few numerical simulations and see how \(Q_{\operatorname{THD}}\) works in action.

where \(\theta(p)\) is the true quantile value. We conduct this simulation according to the following scheme: 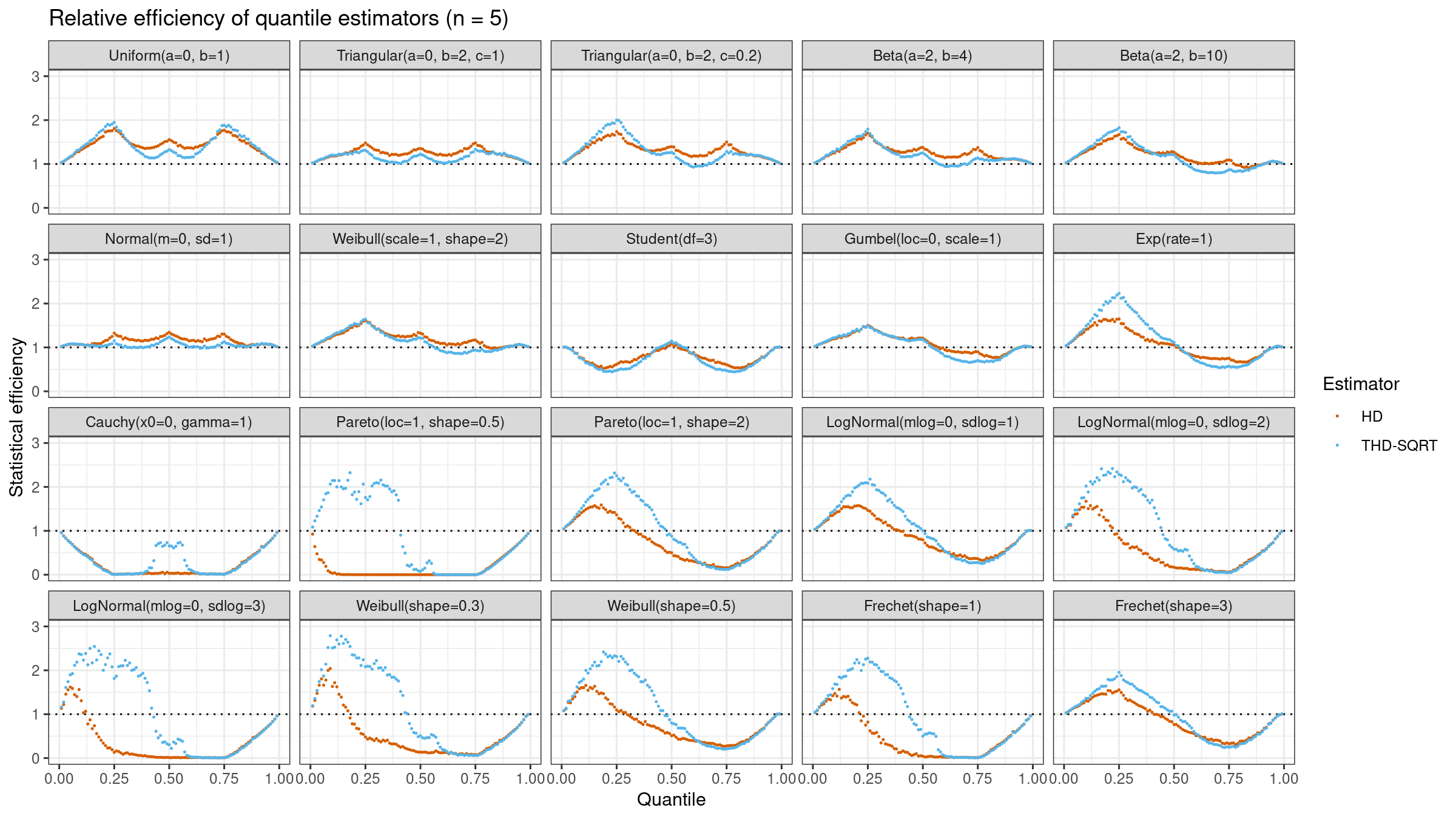 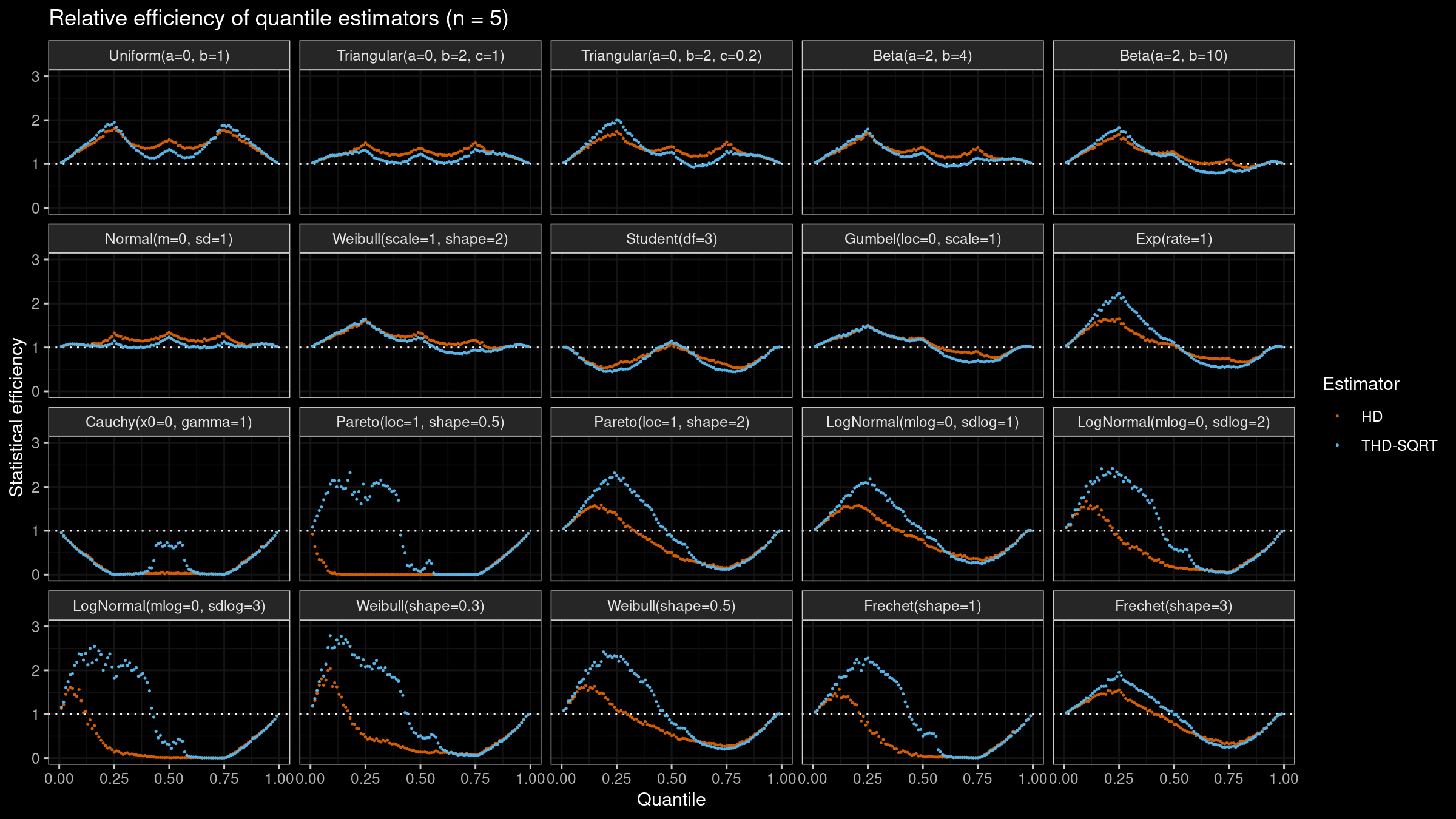 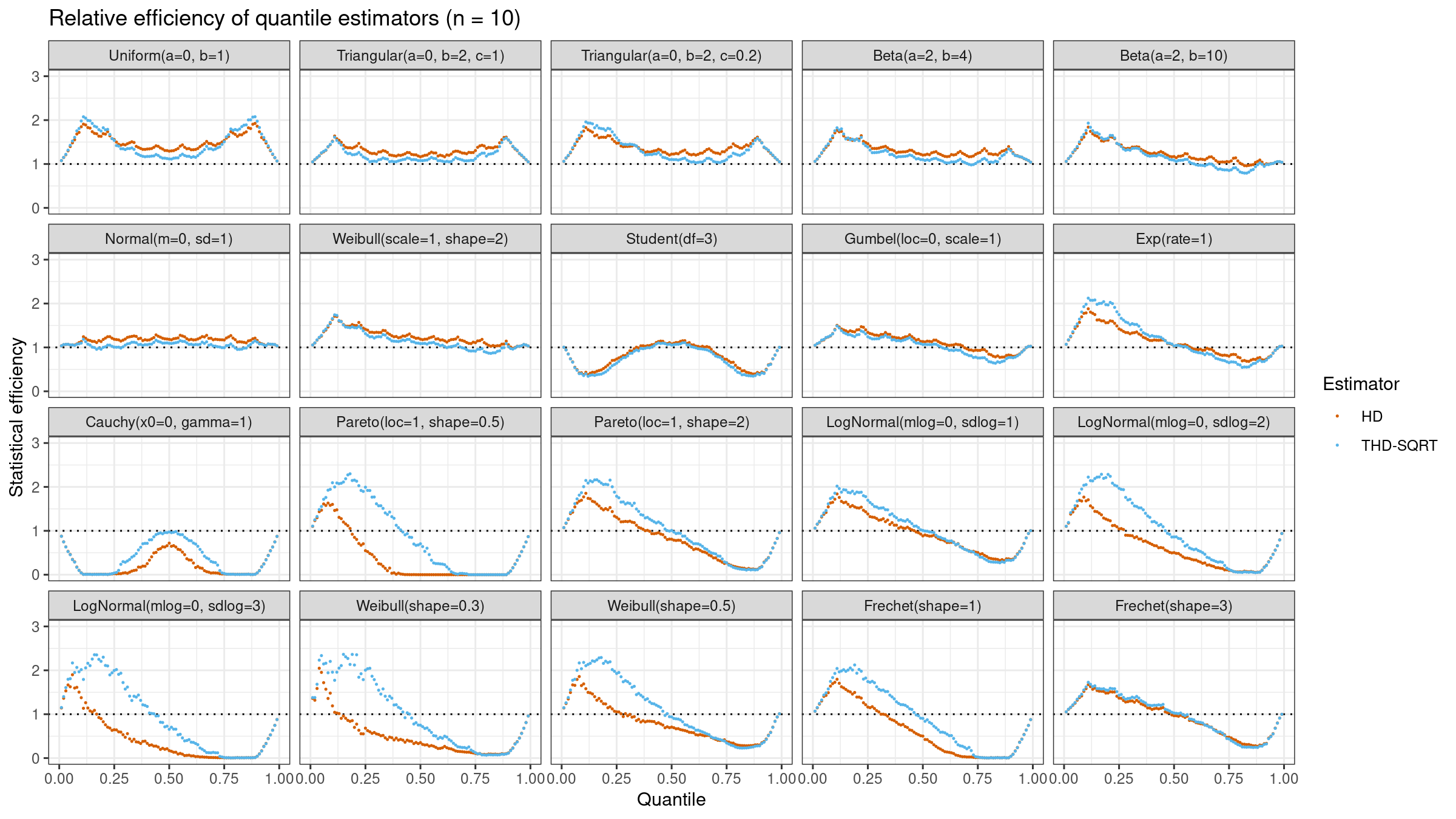 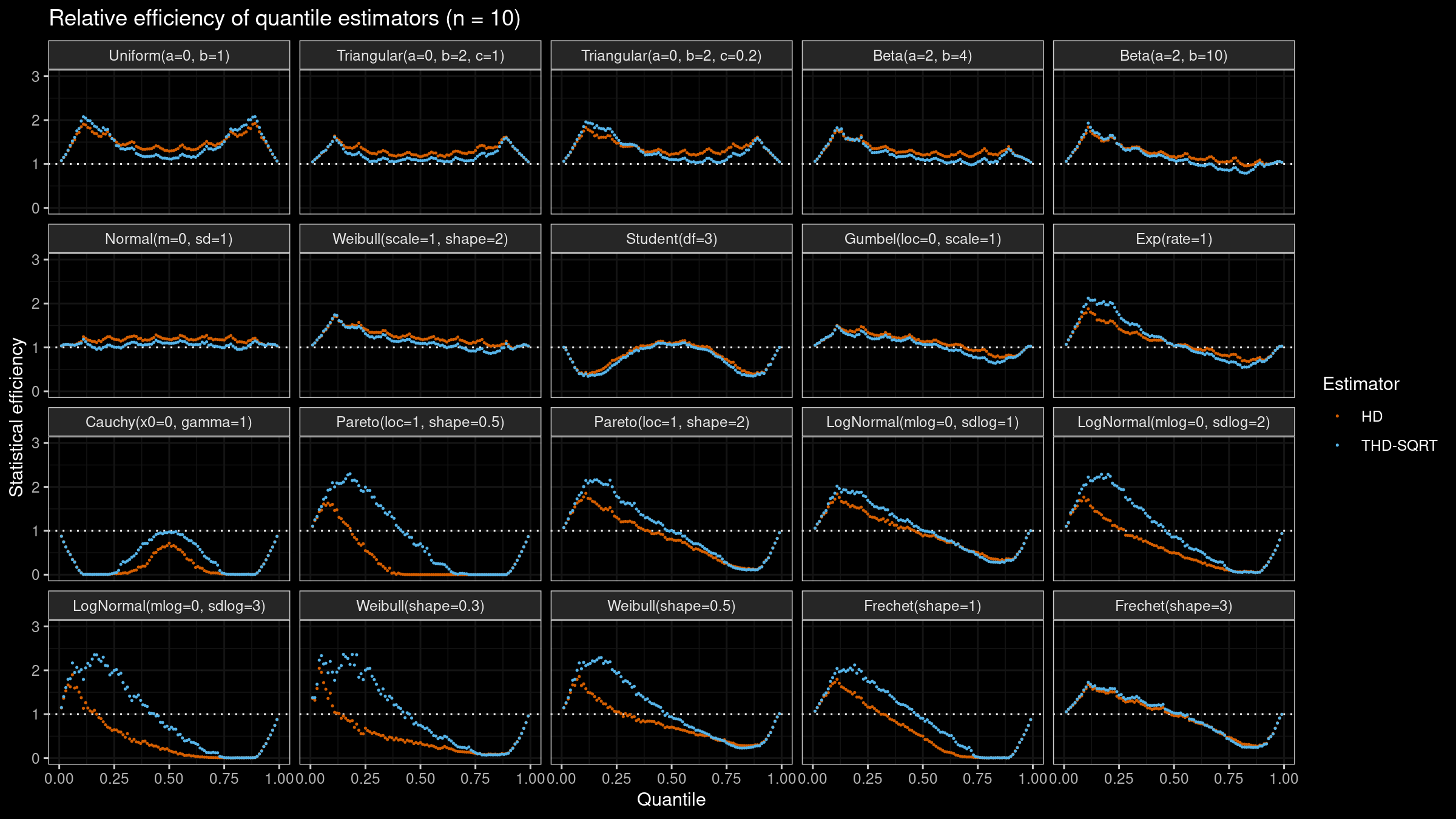 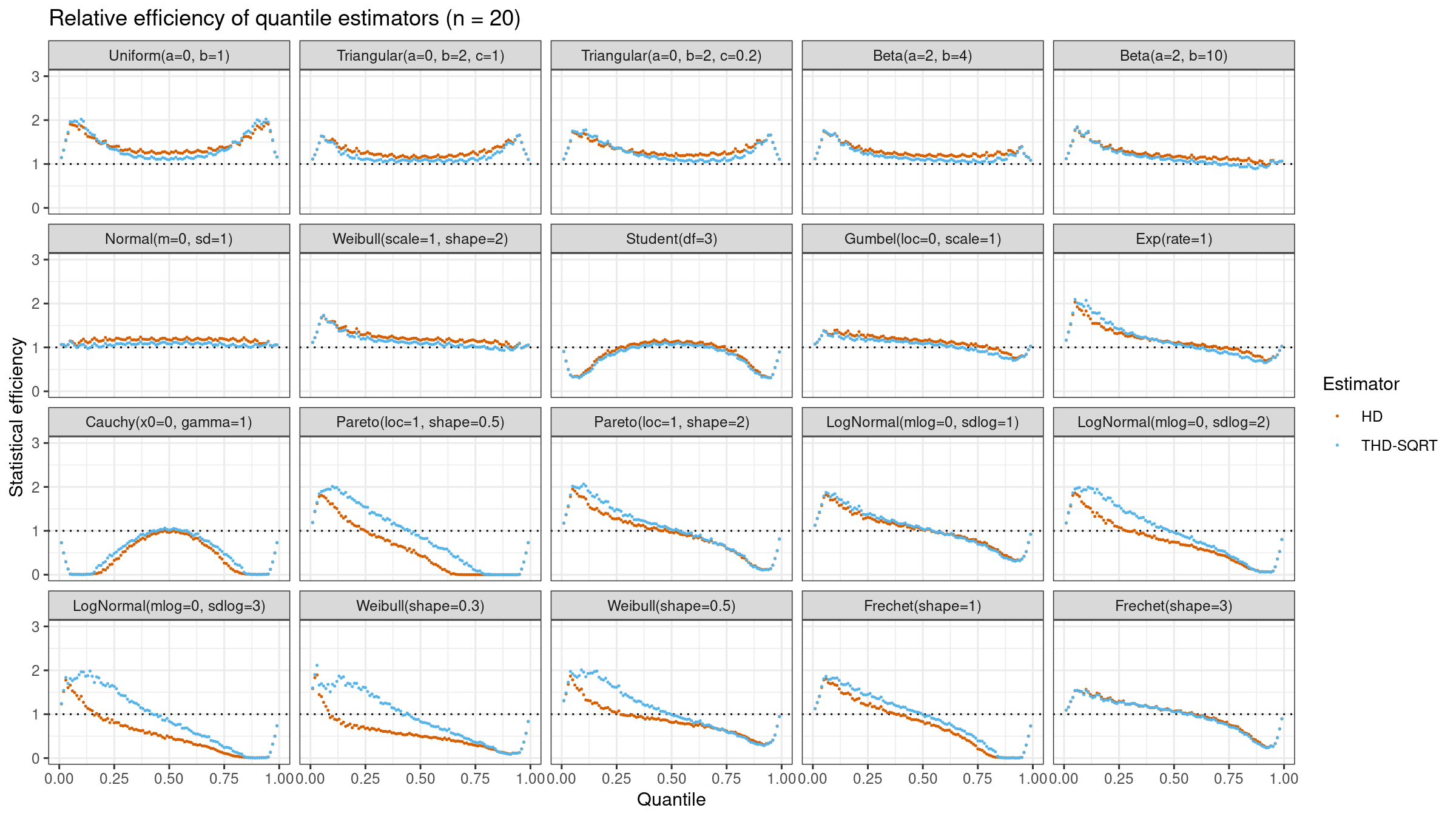 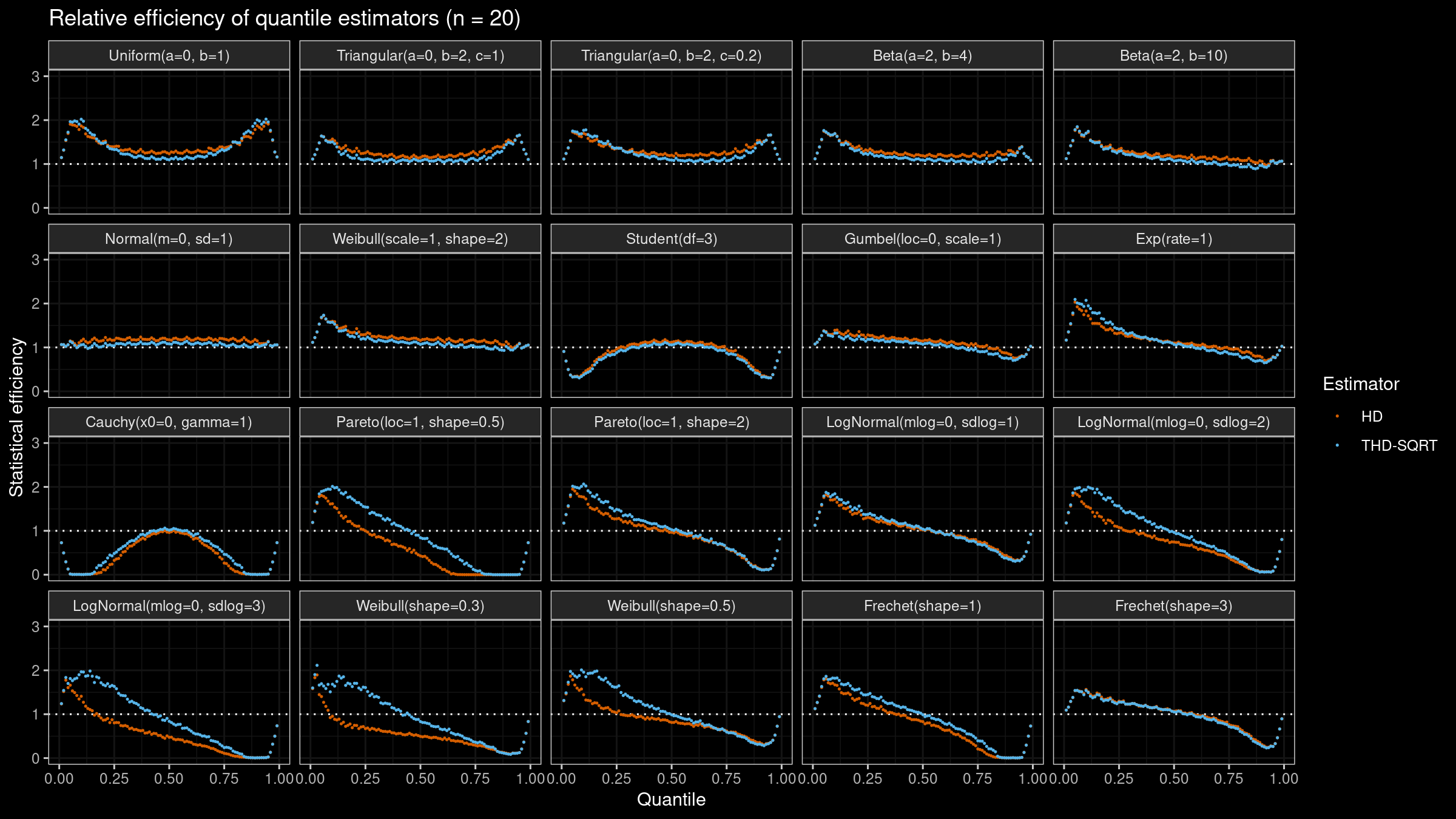 Here is an R implementation of the suggested estimator: